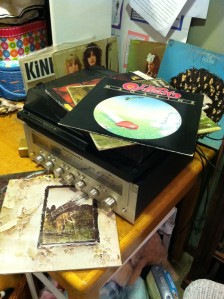 In 1979, Elvis Costello’s “Armed Forces” changed my life. I was in seventh grade, and already owned “My Aim is True,” so was moving in that direction, anyway. Soon after came “London Calling” and “Setting Sons” and the first Pretenders album and … you get the picture. So when I met a girl from Kansas named Barb in 1982, I gave her all my Kansas records. I was done with that shit, man.

This list is born of a day spent watching VH1’s “100 Greatest Hard Rock Songs” with my son, Joe, a year or so ago. Yes, a list is a list and they’re all stupid, but this was a crime against rock, and that I can’t abide. Kids watch that stuff; they need to know the truth.

And so we bring you …

Think of this list as a less a ranking than a moebius strip, looping back on itself and starting again. In the time continuum, new songs will flit in and others will float out, but the nexus will always be the Kinks’ first single, released, remarkably, in 1964. It shouldn’t be on this list – pure British Invasion pop combo flash – and yet it probably should be No. 1. Not as heavy as what comes later, but for sheer volume, distortion and big beat sound, heavier than anything that came before.

Charter members of the post-Zep white-boy boogie club, Foghat was in a lot of ways responsible for inventing the template that dominated late-70s hard rock. This is here because it’s the first sign of that propulsive double-kick drum thrombosis that later exploded into speed metal. Like Zeppelin, they’re riffing, literally, on a blues trope but in their own inimitable fashion. The misogyny, uh, “helps.”

It’s hard to remember that the Nooge was an altogether different caricature in the ’70s, the oversexed rock longhair that irritated your parents (“Suck it!”). Who knew he was a screw head? Never a great artist by any means, he was one hell of a guitarist and occasionally reached an acme of rock n roll dumbassery (see also: “Stranglehold”) as is found here. It’s a good guitar song, and in retrospect the lyrics may be inspired by Ayn Rand.

Here’s a band that has just plain aged well, in some part because they had a unique musical lineup for a muscle band – Jon Lord’s overdriven Hammond B3 as the co-pilot – but mostly because they never met a riff they wouldn’t drive into the ground. And they had the rhythm section to do it in the Mach II incarnation that made their two most revered records, “In Rock” and “Machine Head,” the period that spawned this ode to possession.

What can we say about a band that has become, for some decent reasons, a punch line? For starters, they were at one time very, very good – certainly at what they did. The only American prog band who demonstrably learned at the feet of Yes and Jethro Tull, they nevertheless remained, for a time, a ROCK band. They also threw away riffs that other bands would build songs around; this, however, is not a good example. The mighty organ motif that opens this song is parlayed into an intro, instrumental bridge and coda – all in slightly different modes. You know, like the classical composers used to do it. It’s called dynamics; look into it, youngsters.

I appreciate but don’t particularly like Alice Cooper, which is why this is so far down on the list – though remember, moebius strip – despite that killer (SWIDT?) Glen Buxton opening. I think it’s Cooper’s voice, which to my ears is neither good nor captivating. But I’ve been wrong before. Still, this is undeniably great, and isn’t even the best song on the album (!).

94. “This House Is Rockin’ (With Domestic Problems),” Cheap Trick

There was a time in the late 1970s that Cheap Trick was the best American band (sorry, Aerosmith) and this record, “Dream Police,” was the last salvo of an amazing run of great records that started with “In Color.” This is a good example of what makes the Trick so great: supersonic guitar riff propelled by heavy, steady rhythm section and a lyrical topic that is slightly askew and, oddly, adult. Plus, you know, Robin Zander.

When this record came out I had mostly forsaken long hair hard rock for skinny ties and Farfisas, but damn if this didn’t explode out of an AM car radio. I recall vividly driving down Sheridan Rd., listening to WLS (the only station I could get in the ’72 Carolla) and turning this up. I always admired Def Leppard’s ambition to meld hard and pop rock, but the Scorps did it much better, probably because they didn’t try. Also, is there another portmanteau song that combines power ballad and riff rock as well? Only one, and we’ll get to that in a bit.

Billy Squier was a Zeppelin acolyte with the misfortune to break big a year or so before MTV. He had a few hits, including the greatest Jimmy Page ripoff of all time, “Lonely is the Night,” but this was even better. I’m not sure I can adequately explain why this is so great but let’s start with the fact that like all truly great art it contains not a single false note. Squier made some more money but never rode the dragon like this again, later filming his complete mental breakdown in a video for “Everybody Wants You.”

91. “Behind the Wall of Sleep,” Black Sabbath

In the Age of Irony, Sabbath has become the acme of Hard Rock Stupidity, partly because Ozzy Osbourn has sold his soul not to Satan but to television, and partly because the bearded, Ironic Hipster has never heard Black Sabbath. But the first couple of Sabbath records have more in common with the Sex Pistols and Stooges and Black Flag than, say, Deep Purple, even though they traded in the same riff rock glory unfurled here. It’s stuttering, post-adolescent frustration, this time filtered through Lovecraft and the HEAVIEST guitar sound of all time via Tony Iommi, his SG and a wall of Marshall stacks.

Previously on Tyranny and Rotation …

Out of step, out of place and desperately out of time

The Wall of Yawn

Putting music to words, and words to pictures ~

Don't think you can persuade me with appeals to my intellectual vanity.