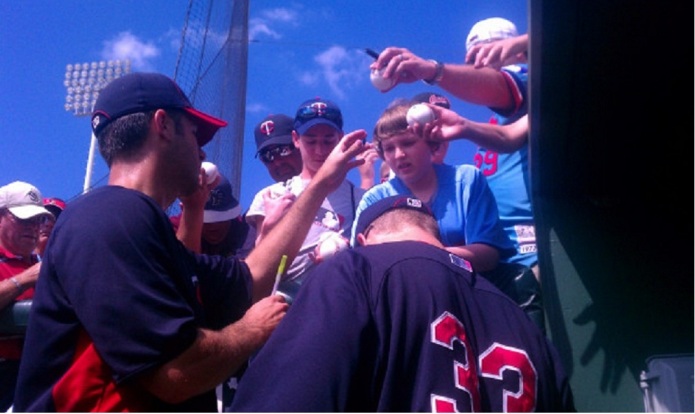 As we discussed a few weeks ago, when you ask Justin Morneau an honest question you’ll get an honest answer, and after surviving the July 31 non-waiver trade deadline, the Twins’ RBI leader copped Sunday to being frustrated. One gets the sense that he’s not so much angry as had his feelings hurt.

A week before the deadline, his people reached out to GM Terry Ryan in an effort to kickstart talk about extending his contract, which expires at the end of the season. Rebuffed, he remains on edge while there is a possibility he gets thrown through trade waivers and dealt before teams have to set their playoff rosters on Sept. 1.

“It’s something that I’ve never gone through before. A lot of guys go through it every year,” he said before hitting his 10th home run of the season in a 3-2 victory over the Astros at Target Field. “This was the first year I really heard Terry say he’s open to the possibility of trading me. Obviously that’s never been an option in the past, or I’ve been hurt at the deadline.”

Indeed, for a good two and a half years of Morneau’s six-year, $80 million extension – signed after he won the American League MVP Award in 2006 – he has been sidelined by injuries, most notably two season-ending concusions and a wrist injury that require surgery, but knee and ankle problems, as well. Morneau hasn’t lost the plot here. He gets it. But he also doesn’t accept the fact that he’s done helping baseball teams win, and his team-leading 57 RBIs and generally stellar defense are proof that he can.

That’s what he’s selling now, at no doubt a lower rate, and the fact that the Twins are circumspect stung.

Teams have 48 hours to shop a player on trade waivers and it’s unclear when Morneau’s time will come, or whether it already has. Because there is a worst-to-first order for waiver claims, choosing when to shoot a player through is one of those games-within-the-game that can fascinate a fan. Because waivers are ostensibly confidential, most of it is unseen. With his salary and expiring contract, Morneau likely would slip past most teams, but a team trying to win a division or wild card spot could claim him just to block their from picking him up – maybe a team the Twins nearly had a deal with before July 31.

With Mark Teixeira out for the season, the Yankees have always seemed like a good bet to me, even if Morneau’s power numbers are at career-low*. And the fact that they’re about to lose A-Rod could make them more aggressive. And consider Morneau’s bat in a lineup more potent than the Twins’. But as you can see, a lot of dominoes have to fall the right way for Morneau to get a chance to play for a pennant. That’s a tempting prospect for any player, especially one who missed his last postseason because of a back injury and then played on two 90-loss teams.

But who are the potential trade partners?

“If you’re in first or second place, you probably have pretty good corner guys who are driving in runs, which is what you’re supposed to do,” Morneau said. “There might be a situation, probably with an American League team, where you could get some at-bats as a DH, get some pinch-hits off a righty during the game, maybe go in for defense, whatever it is.

“The American League seems like it makes a lot more sense because the options are there. If you’re going to pick up a guy who’s making as much money as I’m making, you’re probably going to want to use him as much as you can.”

As Morneau contemplates the possibility of a pennant chase elsewhere, consider the fact that he tried to get the Twins to extend his contract, something he apparently hasn’t given up on. The conversation wasn’t detailed, he said; it was a gesture.

“We just called and said, ‘Is there an interest in working out an extension?’ and they said, ‘Not before the deadline,’ ” Morneau said. “The closer we get to free agency, or the end of September, the harder it’s going to be to do something when you get back, when you get that close.”

At 32 and fit, he seems to have good years ahead of him at first base. With Chris Parmelee apparently hitting a wall, and Miguel Sano a good ways off, it’s not as if the Twins have a ton of options at first, either – certainly none better than Morneau. Not even close. Cheaper, maybe. But not close.

So what is Morneau’s future?

“At this point? The most important thing is winning,” he said.

And here’s the pitch.

“A lot of teams just get a guy and say, ‘We’re going to stick him at first.’ They underestimate the importance, or underrate it, of defense at first base,” Morneau said. “I think a good first baseman you don’t notice as much, but there is somebody bad over there, it really stands out.

“It’s usually a last resort (position) – ‘This guy can’t run anymore; we’ll stick him at first.’ If he isn’t good in the outfield, or doesn’t have as much range at short or third anymore, it’s one of those positions where a team just thinks they can stick somebody over there and figure it out and it’s not going to cost them.

“Heading into free agency, I think sometimes your options can be limited because of that. For me, I want to be in a situation where I’m comfortable and have an opportunity to win. Whatever works out, works out, but …”

There is Minnesota, which made him a first-round draft choice in 1999. Can the Twins give him the opportunity to win? To most of us, it just plain doesn’t appear to be the case. He disagrees.

The reality, certainly in this era, is that the majority of player-team relationships end badly, to one extent or another. At some point, fences are mended and the guy comes back to do radio and coach at spring training. Morneau is about to find out if this is what baseball has in store for him.

“Either the player moves on or the team moves on. It usually seem like somebody’s bitter in the end,” he said. “And sometimes the fans get mad because when a guy leaves, it seems like he leaves for more money, but sometimes the option (to stay) isn’t even presented, so it’s one of those things. It isn’t always the situation that the player’s chasing more money; sometimes it’s opportunity, or feeling like somebody wants them on their team, or whatever it is. It’s not always about money.

“You’re hopeful it doesn’t come to that, but you see guys that don’t come back to an organization for 15, 20 years. That’s tough for the player and the team when you had such a great relationship. I’m not saying that’s going to be me, but from what I remember something similar happened with Harmon (Killebrew) and (Dave) St. Peter ended up bring him back into the organization again. That’s the worst-case scenario, especially with someone like that – not that I would ever put myself in (Killebrew’s) category.

“You’re always hopeful that however it ends, it ends well, and I’m hopeful it doesn’t end this season.”

Previously on Tyranny and Rotation …

Out of step, out of place and desperately out of time

The Wall of Yawn

Putting music to words, and words to pictures ~

Don't think you can persuade me with appeals to my intellectual vanity.